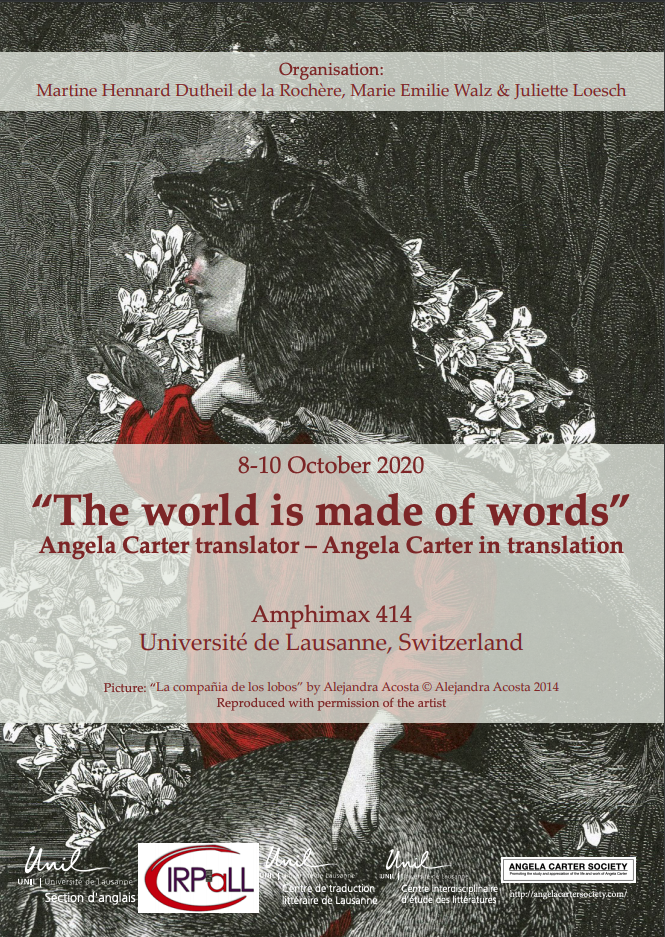 This international conference under the aegis of the Angela Carter Society seeks to explore the transnational and translational dimension inherent in the creation, dissemination and reception of Angela Carter’s œuvre in order to celebrate the 80th anniversary of the birth of one of the most original, thought-provoking and influential British writers of the late twentieth century.

The aim of the conference is two-fold: firstly, we will investigate an understudied aspect of her extremely rich and diverse output, i.e. the role of translation in fashioning her unique voice and creative practice, which informed her thoughts on language, reading, and writing.

Carter mostly translated from the French but she also had a keen interest in Middle English, German, Japanese, and Italian, among other languages, as well as accents, registers and varieties of English. We will trace the impact of foreign languages on her versatile style and reflect more generally on the effects and implications of her philological curiosity that led her to experiment across languages, genres and media. Her fiction indeed reflects a taste for etymologies, antiquated forms of language, foreign idioms, syntax and grammar, but also ideograms, visual signs and non-verbal forms of communication. Secondly, we will shed light on the dissemination and impact of her work in translation (Brazilian, Dutch, French, German, Hungarian, Italian, Japanese, Polish, Portuguese, Spanish, Swedish, etc.). To do so, we will examine specific translation projects, including illustrated editions such as Jesús Gómez Gutiérrez’s La cámara sangrienta with artwork by Alejandra Acosta.

Participants will be expected to be members of the Angela Carter Society, so please join the association if you are not a member already.

The conference is supported by the Centre de Traduction Littéraire (CTL) and the Centre Interdisciplinaire d’Etude des Littératures (CIEL). It is organised in partnership with the CIRPaLL (University of Angers).

For the programme and registration information visit the conference website.

We are seeking proposals for future conferences – please see the guidelines and do get in touch if you are interested in hosting.